They have good intentions.
Their methods are illegal. 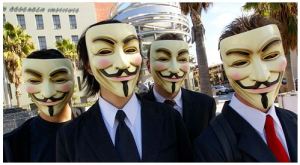 Anonymous is an international hacking group which holds power over the Internet due to its massive size and contrasting anonymity. It is speculated that Anonymous began on the image board sites such as ‘4chan’, which gave birth to many popular memes such as ‘lolcatz’ and ‘rick rolling’.  Anonymous symbolically wears the Guy Fawkes mask, made famous by ‘V for Vendetta’, to hide their identity.

As a hacking community they have infiltrated all sorts of websites. Anonymous claim these attacks are the result of corporate greed, privacy violation and the like.  The best way to conclude Anonymous’ intentions is to understand what their hacks are; their operations usually consist of a DDoS attack (distributive denial of service), this makes the website inaccessible. In doing this they are not stealing any private information from those companies. This is not to say they don’t steal data, they stole information for Wikileaks in their campaign for freedom of information. When taken on an incident by incident basis, Anonymous can be seen in both good and bad light. There have been hacks for the purpose of taking down paedophile darknets, drug cartels, and uncovering all manner of criminals. On the other hand there have been attacks on tribute sites and the like.

‘Operation Occupy’ is real world protest run by Anonymous. Their mantra is ‘we are the 99%’ referencing the unbalance of wealth that has one percent of people extremely rich. There are ongoing protests in around 95 cities with people occupying business sectors. Any operation that has been wholly endorsed by Anonymous has been an act of good. But as almost anyone can join, this inevitably means people using Anonymous’ name in their own endeavors. Anonymous is proud just like anyone else, the difference is they have the ability to do something about it. They have the responsibility to set down strong rules to keep their members in check.

And plus, I wouldn’t want to tick off some Anonymous member that just happens to be roaming the school blogs in his spare time by giving them a bad rap now would I?

Anonymous, first started in 2003 to attack internet sites that have been seen wrong by the members of the group. Anonymous attacks have stepped up since 2006, from when they first started by attacking social networking sites like Habbo hotel, to attacking the religious group scientology. Many “high power” people which have said things against Anonymous, or which have offended Anonymous, have had their emails and websites published on the internet which has ended up destroying many business.

The sort of power anonymous harnesses is that they can attack just any website on the Internet, they have hacked government websites with strong firewalls, so it is most people on the Internet. Teaming up with new freedom of information group Wiki leaks, helping the company release private information that they see as information everyone should know.

Anonymous hasn’t got there power from one single person but a group of people which have set up sophisticated, planed attacks on companies on people and business. The way Anonymous came about their power is un-explainable because it is just a group of Internet hackers working together.

Anonymous outcomes or achievements have come from hacking websites and releasing information or personal information. In February Aaron Barr from HBGary Federal lawyers said he had cracked Anonymous. This was a mistake because Anonymous went on to hack the websites main page and replace it with the message “Anonymous should not be messed with” and also 68,000 personal emails were posted. This put the company to a loss of $2,500,000. Anonymous uses their power for good by freedom of information and destroying many bad companies.

Anonymous really depends on which side of the fence you sit on, if the hacks are being done to you, you may think that the organization is corrupt, or in the opposite direction if its practice what you believe in then it is a good person and not corrupt and upholding the rights to freedom of information. They also have the power to affect people as you can see in the protest which are being held all over the world at the moment, Exposing company greed, because most of these members that started the peaceful protest were member of anonymous.